And he was supposedly photographed doing so.

“Time out for a short halt to take a piss in the Rhine” was how Patton proclaimed his intentions, according to military historian and biographer Carlo D’Este. And the general then did what he said he would do.

D’Este notes that only “a single (unpublished) photograph exists of Patton urinating in the Rhine.” 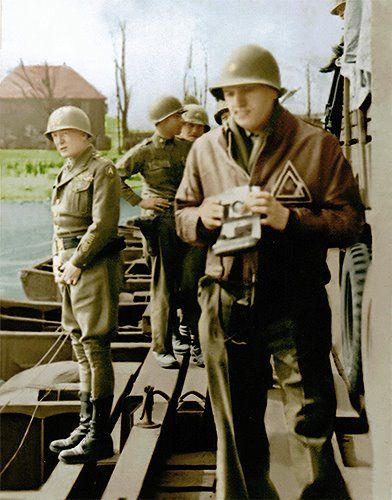 This photograph, with Patton, left, apparently in classical army-approved urinating position, is often reproduced in contexts suggesting that the supposedly unpublished photograph (D’Este’s biography of Patton was published in 1995) has since been published. But it leaves open the question, as the British would say, ‘Where’s Willie?’

Better than a fire hydrant 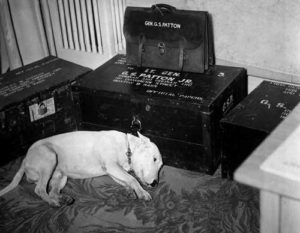 Willie with some of his master’s belongings after Patton was killed in a road accident in December, 1945.

Willie is, of course, Patton’s beloved terrier whom the General described as his “second in command.”

And this Willie’s willie also used urination to make a personal statement. Patton had given Willie a bust of Hitler expressly for the dog to pee on.

As for Patton on the pontoon bridge, maybe my eyesight is declining, but if the dog has been there on the pontoon, I think I would be seeing only one Willie.

And why is the soldier with the camera turned away from the main event? Did Patton do a Churchill and give a no-pictures order?