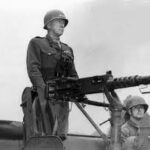 Before he reached the Rhine River in Germany, Patton bestrode the Seine in France and marked his territory: “Patton, after a flying visit, proudly announced to Bradley that he had ‘pissed in the river that morning.'” Antony Beevor, D-Day, quoting Martin Blumenson, ed., Patton Papers. See Patton Pis for more information.

And he was supposedly photographed doing so. END_OF_DOCUMENT_TOKEN_TO_BE_REPLACED