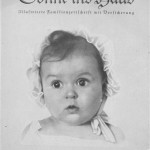 When Hessy Levinson was chosen (possibly by Josef Goebbels) as Germany’s most beautiful Aryan child, her parents were more scared than proud. This beauty queen was a time bomb.

And the winner is…

Jacob and Pauline Levinson moved to Berlin from their native Latvia in 1928 and started a family. Seven years later and parents of a six-month-old girl, Hessy, they hired Hans Ballin to shoot baby pictures.

This ordinary commercial encounter became extraordinary after Ballin entered her picture in a perfect-Aryan-baby contest – without telling her parents. 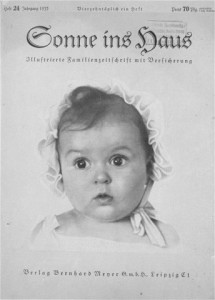 Ballin knew that the Levinsons were Jewish; he also wanted to mock Nazi racial theory.  Hessy’s parents learned what had gone on behind their backs only when a relative sent them a postcard illustrated with Hessy’s picture.

With Hessy’s photo also on the cover of the popular Nazi magazine Sonne ins Haus [Sun in House], the Levinsons were worried that if their daughter’s Jewish identity became known, the entire family would be in mortal danger. Among other stratagems, they kept their daughter indoors. The Nazis never learned her true ethnicity.

The Levinsons subsequently returned to Latvia and then moved to Paris before the outbreak of the war.

While in Paris, a friend of the Levinsons suggested that, as they were now in France, they could safely reveal the truth.  Her father opposed this suggestion – wisely, as it turned out. The Nazis overran France in June 1940.

When the Nazis rounded up French Jews, the Levinsons fled to Cuba and then to America. 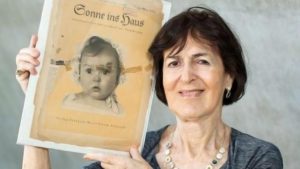 Hessy’s surname is variously spelled Levinson and Levinsons. As for the photographer, Hans Ballin, I suspect that if the Nazis had cottoned on to Hessy’s true identity, he might have been in as much danger as the Levinsons.