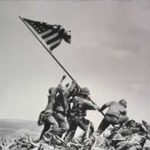 In 2016 – nearly 70 years after the fact – the Marine Corp concluded that Navy Corpsman John Bradley was not actually one of the six flag raisers. Alas, Bradley was the best known member of the group.

When the Marines discovered that photographer Joe Rosenthal had not submitted a list of the names of the six flag raisers, the Corp later named three men who were killed at Iwo: Harlon Block, Michael Strank and Franklin Sousley.

The other three – John Bradley, Rene Gagnon and Ira Hayes- returned to America to sell war bonds in a campaign based on the famous flag-raising photo. Their unit, the 5th Marine Division, went to Hawaii.

October 17, 2019: The U.S. Marine Corps issued new information concerning the identity of the soldiers raising the flag. More information, and the full press release, is here.

None of the men’s faces are visible in the photograph; it is not even clear how many men are involved (the Pulitzer website erroneously counts only five). 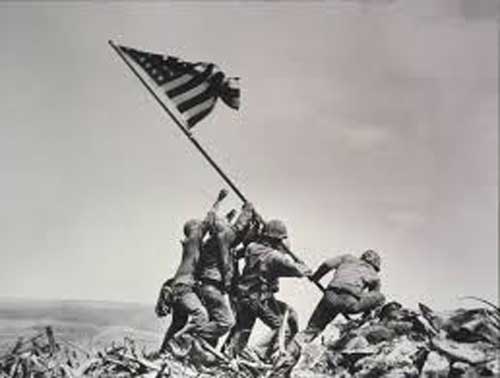 In 2014, historians Eric Krelle and Stephen Foley carefully examined the clothing, the weapons, the pouches and every other salient feature and concluded that Bradley could not have been one of the six.  In 2016 a Smithsonian documentary, “The Unknown Flag Raiser of Iwo Jima,” also raised questions, and the Marine Corps ultimately accepted their findings.

The sixth man was in fact Harold Schultz, a native of Michigan, and he too returned home after being injured shortly after the flag raising. He became a mail sorter and died in 1995. He was 70.

Meanwhile, John Bradley was cited as one of the six flag-raisers in the best-selling book, Flags of Our Fathers, written in good faith by his son James. Clint Eastwood then directed a movie based on the book.

Excised from the second flag-raising, Bradley (1923-1994), a medic from Wisconsin, had been a participant in the first. And no doubts surround his Navy Cross, awarded to him for bravery two days before the flag raising.

The 2014 mis-identification story appeared in the Omaha (Nebraska) World-Herald, and it remains a superb resource for showing in specific detail how the researchers reached their conclusion. Also highly informative are 2016 pieces in the Washington Post and New York Times. Comprehensive information on the men, the island, the battle and the flag-raisings appears on the public U.S. Marines website.