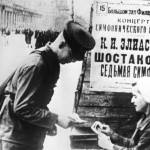 A Red Army soldier purchases a ticket for the historic – in some ways, miraculous – performance of Shostakovich’s Seventh – the “Leningrad.” At the time, cats – being edible – were more valuable than roubles.The Germans invaded the Soviet Union on June 22, 1941. Less than three months later, on September 8, the siege of Leningrad began.

Leningrad, one year into its 900-day siege: The poster announces a concert featuring Dmitri Shostakovich’s Seventh Symphony. It was performed by  a pick-up orchestra of accomplished but starving and exhausted and grief-stricken musicians.

Dmitri Shostakovich (1906-1975) was a Leningrad resident when the siege began; Soviet authorities insisted that he relocate to the safer Kuibyshev, further east. 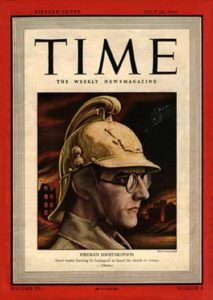 He worked feverishly to complete his Seventh Symphony, but by the time the work was to be performed in Leningrad, the regular philharmonic orchestra had been disbanded. A scratch orchestra was formed, composed of local Leningrad residents who had been suffering from the effects of the siege along with everyone else.

“With supplies cut off, Leningraders were eventually reduced to eating rats, horses, cats and dogs,” according to a 2016 BBC feature article. “There were also reports of cannibalism. And while hunger plagued the residents the Luftwaffe attacked them from the air, carrying out frequent heavy raids.”

When one of the orchestra’s oboists fetched her instrument after it had been repaired, the repairman told her that she could pay with a cat – which he would eat. Better than chicken, he confided. (In Taste of War [2011] Lizzie  Collingham writes of a Russian girl in a village outside Leningrad whose “mother made a soup out of the family cat and a gruel of birch wood, against which their stomachs revolted.)

Despite the utterly horrid circumstances, one of the most remarkable concerts in the history of classical music was held on August 9, 1942.

Soviet authorities made the concert part of their war effort, transmitting the music by loudspeaker not only to the inhabitants of Leningrad but to the German troops surrounding the city.

The performance, under those conditions, had a double effect: Soviet morale was boosted, German anxiety increased.

After the war, as the BBC reports, former German soldiers told the conductor, Karl Eliasberg “that when they heard the performance of Shostakovich’s symphony they understood that a city of people who showed such spirit would not capitulate. One is reported to have said that his comrades shed tears when they heard the music.”

If Shostakovich was sufficiently important to be protectively relocated to Kuibyshev in 1941, his reputation only a few years earlier had been dire.

When his opera Lady Macbeth of Mtsensk premiered in 1936,  a Pravda reviewer – unnamed – was less than impressed.

Shostakovich suspected the identity of that anonymous reviewer. The premier was attended by Soviet Premier Josef Stalin, and the composer noticed him wincing when the music was discordant.

Shostakovich believed, apparently correctly, that the anonymous Pravda critic was Stalin himself. The composer, again rightly, feared for his life. The Terror had begun. Stalin killed friend and foe alike, and for all that Shostakovich knew, a disappointing night at the opera might spell his doom.

By the time the war began, Shostakovich was no longer reviled, and after his Leningrad Symphony, he was revered – a status he retained to the end of his life. After his Seventh, he wrote six more symphonies. And no more operas. Lady Macbeth of Mtsensk was his final foray in that form.

[The “History in an Hour” website has provided an English translation of the Pravda review, Muddle, not Music.]