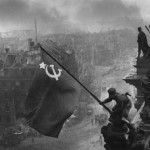 A 2008 article on the website of German magazine Der Spiegel pulled no punches: the famous photograph of the Red Flag atop the Reichstag was “faked“. 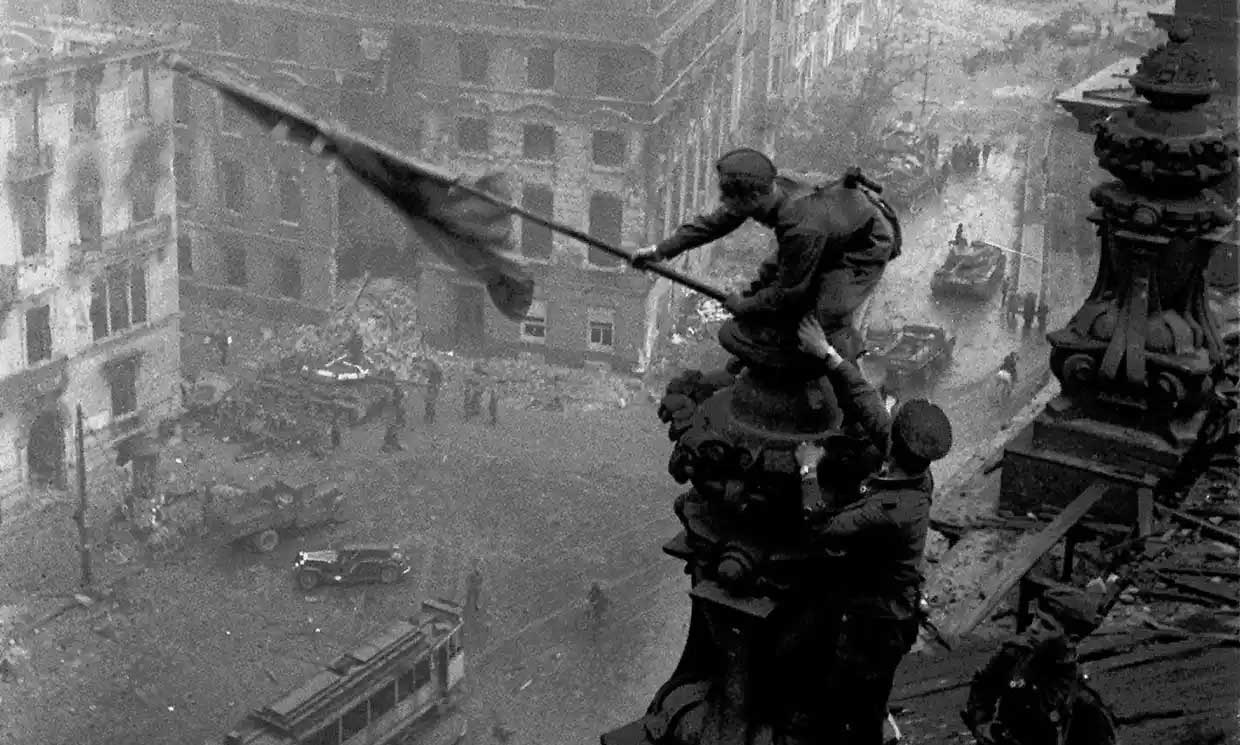 On May 2, two days after Hitler killed himself in his Berlin bunker, Khaldei (1917-1997) was ready to record the symbolic image of Germany’s capitulation – the Red Army’s capture, after vicious corridor-by-corridor fighting, of the Reichstag.

The resemblance between Khaldei’s Reichstag and Rosenthal’s Iwo Jima is not accidental or coincidental. Khaldei admired Rosenthal’s photograph and sought to imitate it. 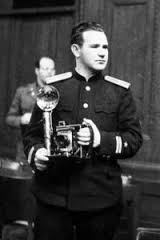 Using a flag made on location from curtain material, Khaldei positioned several Red Army soldiers and took a series of photographs, shooting an entire 36-exposure roll of film with a 35mm camera, possibly a Leica.

The developed film showed that, in the best photograph, the soldier supporting the flag-raiser was wearing two wristwatches, one on each arm – clear evidence of Soviet looting.  One watch had to go.

It did: Khaldei took a pin and scratched out the watch on the right wrist. He also added some background smoke for dramatic effect.

In fact, the original untouched photo still exists and still circulates widely. The photo is also often reproduced in highly cropped versions which omit the offending arm – and even the soldier himself. 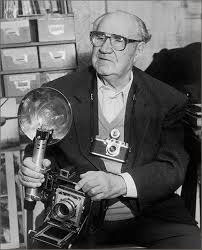 According to Der Spiegel, Khaldei used a Leica at the Reichstag, and in 2014 Bonhams auctioned the very Leica that Khaldei supposedly used.

But Spiegel also notes that when Khaldei could finally afford a quality camera several decades after the war, he chose a Rolleiflex, exclaiming “I never had such a camera in all my life.”

Did his forget that he used a Leica to capture his best known photograph, or was his wartime camera actually Russian-made?

Heinrich Hoffmann, Hitler’s photographer, was in Moscow for the signing of the Molotov-Ribbentrop pact in 1941. Stalin’s photographer, he recorded in Hitler was my Friend, “had a sort of Leica camera, but it was an obvious imitation of the original and a very shoddy affair. And as it was incapable, in the light conditions, of taking a photo without flashlight, he was at a distinct disadvantage.”

Another question – and another similarity to Iwo Jima – concerns the number of flag-raisings. Apparently, the Red Army raised the Hammer and Sickle a few days before Khaldei’s May 2 photograph but the Germans removed it. Khaldei photographed the second attempt.

Khaldei was born in Donetsk, in the Ukraine into a Jewish family persecuted first by Russians in a pogrom – resulting in injuries to himself, his mother and grandfather – and then in the Holocaust, when the Germans murdered his father and three of his four sisters.