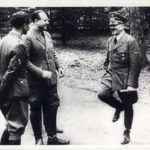 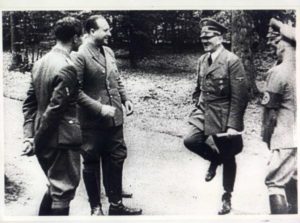 Even in 1940, it was easy to loop still photographs to make them look like a movie clip. And that technique was apparently applied to this photograph, mocking the dictator at a moment of great triumph for him.

In his book Hitler was my Friend, Hitler’s chief photographer, Heinrich Hoffmann notes that when Hitler learned of the French capitulation, he “for a moment threw to the winds his dignity…and slapped himself gleefully on the thigh.”

A thigh-slap is very different from a dance movement, and Hoffmann says nothing about the alleged jig. And as he was there at the time, he was presumably in a position to know.

Hoffmann was off-duty at the time, not taking pictures (he is not even carrying his camera) but mingling with Hitler’s staff, one of the boys. In the photograph above, he is just out of frame, fairly close to his boss.

He was therefore in a position to see what was going on – but he was not always looking in the direction of his boss. A series of pictures were taken on this occasion, and in the few in which he appears, his back is toward the dictator. Hitler might have done a quick jig, and Hoffmann might not have noticed. (Many of these images appear in a two-page spread in Life magazine, October 21, 1940.)

However, his book reproduces this dancing-jig image, cropped to depict Hitler alone, with this caption:  “Hitler dances for joy at the capitulation of France.”

This caption seems to lend weight to the argument that Hitler did in fact execute a brief jig.

However, it is possible, even likely, that Hoffmann neither wrote nor approved the captions in his book.

By the time it appeared, the story of Hitler’s jig was widespread, and the caption-writer might simply have been reflecting what seemed to be common knowledge.

The opposing image-was-manipulated argument is convincingly aired on the Iconic Photos website.