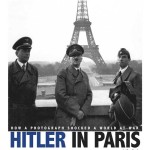 This photograph “shocked the world”, according to the small print above the title of this slim volume by Don Nardo. As well it might: Hitler in Paris was the mother of all photo ops.

Photography in the City of Light

After France surrendered at Compiègne on June 22, 1940, Hitler went to Paris the next day for a visit lasting only three hours.

In addition to the Eiffel Tower, he took in Napoleon’s Tomb at Les Invalides, the Arc de Triomphe, Sacre Coeur, the Paris Opera House and a few other major sights. The resplendent opera house seems to have interested him the most.

Easy to overlook in this photo is the fourth person in the frame – a military photographer capturing the occasion with a movie camera. Hitler’s entourage included plenty of photographers – still and newsreel. 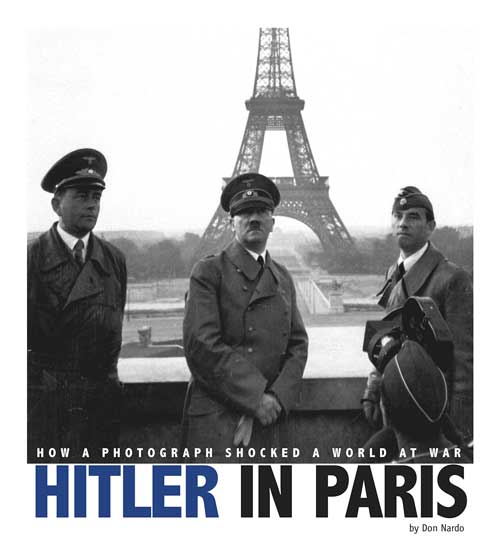 In my opinion, the other famous Hoffmann shot of Hitler in front of the Eiffel Tower – the one in which the dictator is flanked by several rows of his military officers, adjutants and others, all walking toward the camera – is more shocking. It is more suggestive of the Wehrmacht’s military might and the traits that accompany it: Nazi confidence and arrogance.

But this photograph – in which Hitler is silently proclaiming that Paris and France are mine – certainly conveys a political message of unmistakable import.