The gap is intriguing: in this small intimate gathering, someone should be on Hitler’s left. Someone was.

Now You See Him… 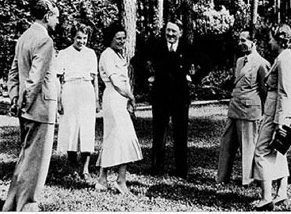 Flanking his boss was Nazi propaganda minister, Josef Goebbels, in this 1937 image. On Hitler’s right is Leni Riefenstahl, the film director who produced Triumph of the Will. 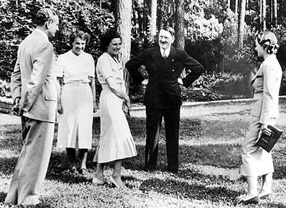 Goebbels was removed from this picture – not entirely successfully; this clumsy pre-photoshop attempt left a ghostly rectangle.

The excision was apparently on the orders of Hitler, determined to clean up the image, ironically, of his own propaganda minister.

Goebbels was a serial adulterer who, with his control over Germany’s film industry, frequently enjoyed the privileges of the casting couch. For a time Czech actress Lida Baarová was his mistress – apparently (she later denied any intimacy between them).

Goebbels was also rumored to have been involved with Riefenstahl, whom he ardently pursued, although she too – like Baarová – denied any physical intimacy with him. She claimed that their relationship had been purely professional, although he often propositioned her.

Hitler was aware of the rumors concerning Goebbels and Riefenstahl. Seeing the two of them in the same photograph would feed those rumors, so Hitler ordered his photographer to disappear Goebbels.

Meanwhile, Goebbels’ wife Magda had also been playing away (her first marriage ended when her husband discovered she was having an affair) and contemplated divorcing the propaganda minister. Hitler put a stop to that, ordering both of them to maintain the appearance of a solid marriage. For Goebbels, that meant ending his relationship with Baarová.